A Profile of Older Americans: 2011

In 2010, older men were much more likely to be married than older women–72% of men, 42% of women (Figure 2). Widows accounted for 40% of all older women in 2010. There were over four times as many widows (8.7 million) as widowers (2.1 million).
Divorced and separated (including married/spouse absent) older persons represented only 12.4% of all older persons in 2010. However, this percentage has increased since 1980, when approximately 5.3% of the older population were divorced or separated/spouse absent.

(Based on Internet releases of data from the 2010 Current Population Survey, Annual Social and Economic Supplement of the U.S. Census Bureau)

Over half (55.1%) the older non-institutionalized persons lived with their spouse in 2010. Approximately 11.7 million or 69.9% of older men, and 9.0 million or 41.3% of older women, lived with their spouse (Figure 3). The proportion living with their spouse decreased with age, especially for women. Only 30.4% of women 75+ years old lived with a spouse.
About 29.3% (11.3 million) of all non-institutionalized older persons in 2010 lived alone (8.1 million women, 3.2 million men). They represented 37.3% of older women and 19.1% of older men. The proportion living alone increases with advanced age. Among women aged 75 and over, for example, almost half (47%) lived alone.
Approximately 746,000 grandparents aged 65 or over maintained households in which grandchildren were present in 2010. (Another 275,000 elderly were spouses of such people.) In addition, about 955,000 grandparents over 65 years lived in parent-maintained households in which their grandchildren were present. A total of about 1.94 million older people lived in household with a grandchild present in the house. About 485,000 of these grandparents over 65 years old were the persons with primary responsibility for their grandchildren who lived with them.
A relatively small number (1.5 million) and percentage (4.1%) of the 65+ population in 2009 lived in institutional settings such as nursing homes (1.3 million). However, the percentage increases dramatically with age, ranging (in 2009) from 1.1% for persons 65-74 years to 3.5% for persons 75-84 years and 13.2% for persons 85+. In addition, approximately 2.4% of the elderly lived in senior housing with at least one supportive service available to their residents. 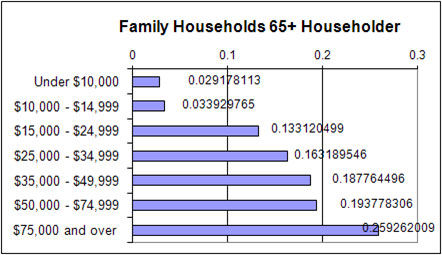 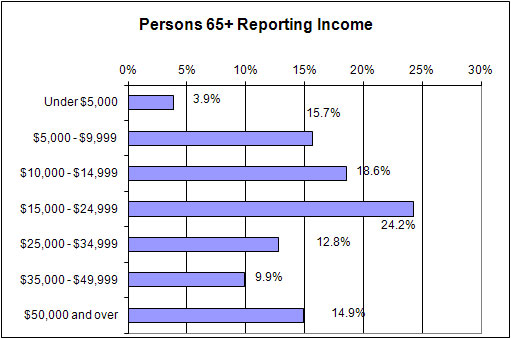 $18,819 median for 37.9 million persons 65+ reporting income
For all older persons reporting income in 2010 (37.9 million), 19.6% reported less than $10,000 and 37.6% reported $25,000 or more. The median income reported was $18,819.
The major sources of income as reported by older persons in 2009 were Social Security (reported by 87% of older persons), income from assets (reported by 53%), private pensions (reported by 28%), government employee pensions (reported by 14%), and earnings (reported by 26%). In 2009, Social Security benefits accounted for 38% of the aggregate income of the older population. The bulk of the remainder consisted of earnings (29%), asset income (11%), and pensions (19%). Social Security constituted 90% or more of the income received by 35% of beneficiaries (22% of married couples and 43% of non-married beneficiaries).
(Based on data from Current Population Survey, Annual Social and Economic Supplement, “Income, Poverty, and Health Insurance Coverage in the United States: 2010” P60-239, issued September, 2011 by the U.S. Census Bureau, related Census detailed tables on the U.S. Census Bureau web site, and from Fast Facts and Figures About Social Security, 2011, Social Security Administration)

Almost 3.5 million elderly persons (9.0%) were below the poverty level in 2010. This poverty rate is not statistically different from the poverty rate in 2009 (8.9%). Another 2.3 million or 5.8% of the elderly were classified as “near-poor” (income between the poverty level and 125% of this level).
One of every 15 elderly Whites** (6.8%) was poor in 2010, compared to 18.0% of elderly African-Americans, 14.6% of Asians, and 18.0% of elderly Hispanics. Higher than average poverty rates were found in 2010 for older persons who lived in principal cities (11.2%), outside metropolitan areas (i.e. rural areas and small towns) (10.4%), and in the South (10.5%).
Older women had a higher poverty rate (10.7%) than older men (6.7%) in 2010. Older persons living alone were much more likely to be poor (16.0%) than were older persons living with families (5.3%). The highest poverty rates were experienced among Hispanic women (40.8%) who lived alone and also by older Black women (30.7%) who lived alone.
During 2011, the U.S. Census Bureau released a new Supplemental Poverty Measure (SPM). The SPM methodology shows a significantly higher number of older persons below poverty than is shown by the official poverty measure. For persons 65 and older this poverty measure shows a poverty level of 15.9% (an increase of over 75% over the official rate of 9.0%). Unlike the official poverty rate, the SPM takes into account regional variations in the cost of housing etc. and, even more significantly, the impact of both non-cash benefits received (e.g., SNAP/food stamps, low income tax credits, WIC, etc.) and non-discretionary expenditures including medical out-of-pocket (MOOP) expenses. For persons 65 and over, MOOP was the major source of the significant differences between these measures. Bear in mind that the SPM does not replace the official poverty measure.
(Based on data from Current Population Survey, Annual Social and Economic Supplement, “Income, Poverty, and Health Insurance Coverage in the United States: 2010,” P60 239, issued September, 2011, by the U.S. Census Bureau and related Census detailed tables on the U.S. Census Bureau web site and on “The Research Supplemental Poverty Measure,” P60-241, issued November 2011)

The educational level of the older population is increasing. Between 1970 and 2010, the percentage of older persons who had completed high school rose from 28% to 79.5%. About 22.5% in 2010 had a bachelor’s degree or higher. The percentage who had completed high school varied considerably by race and ethnic origin in 2010: 84.3% of Whites**, 73.6% of Asians, 64.8% of African-Americans, and 47.0% of Hispanics. The increase in educational levels is also evident within these groups. In 1970, only 30% of older Whites and 9% of older African-Americans were high school graduates.
(Source: Current Population Survey, Annual Social and Economic Supplement, 2010 and related tables on the U.S. Census Bureau web site)

In 2000-2009, 40.0% of non-institutionalized older persons assessed their health as excellent or very good (compared to 64.7% for all persons aged 18-64 years). There was little difference between the sexes on this measure, but older African-Americans** (26.0%), older American Indians/Alaska Natives (24.3%) and older Hispanics (28.2%) were less likely to rate their health as excellent or very good than were older Whites** (42.8%) or older Asians (35.3%)†. Most older persons have at least one chronic condition and many have multiple conditions. In 2007-2009, the most frequently occurring conditions among older persons were: uncontrolled hypertension (34%), diagnosed arthritis (50%), all types of heart disease (32%), any cancer (23%), diabetes (19%), and sinusitis (14%).
Almost 63% reported in 2010 that they received an influenza vaccination during the past 12 months and 59% reported that they had ever received a pneumococcal vaccination. About 27.7% (of persons 60+) report height/weight combinations that place them among the obese. Almost 35% of persons aged 65-74 and 24% of persons 75+ report that they engage in regular leisure-time physical activity. Only 9.5% reported that they are current smokers and only 5% reported excessive alcohol consumption. Only 2% reported that they had experienced psychological distress during the past 30 days.
In 2007, about 12.9 million persons aged 65 and older were discharged from short stay hospitals. This is a rate of 3,395 for every 10,000 persons aged 65+ which is about three times the comparable rate for persons of all ages (which was 1,149 per 10,000). The average length of stay for persons aged 65+ was 5.6 days; the comparable rate for persons of all ages was 4.8 days. The average length of stay for older people has decreased by 5 days since 1980. Older persons averaged more office visits with doctors in 2007: 7.1 office visits for those aged 65 and over while persons aged 45-65 averaged only 3.7 office visits during that year. In 2010, almost 97% of older persons reported that they did have a usual place to go for medical care and only 3.0% said that they failed to obtain needed medical care during the previous 12 months due to financial barriers.
In 2010 older consumers averaged out-of-pocket health care expenditures of $4,843, an increase of 49% since 2000. In contrast, the total population spent considerably less, averaging $3,157 in out-of-pocket costs. Older Americans spent 13.2% of their total expenditures on health, more than twice the proportion spent by all consumers (6.6%). Health costs incurred on average by older consumers in 2010 consisted of $3,085 (65%) for insurance, $795 (18%) for medical services, $805 (17%) for drugs, and $158 (3.0%) for medical supplies.
(Sources: Data releases from the web sites of the National Center for Health Statistics; and from the Bureau of Labor Statistics web site)
† These figures are from 2006-2008 data 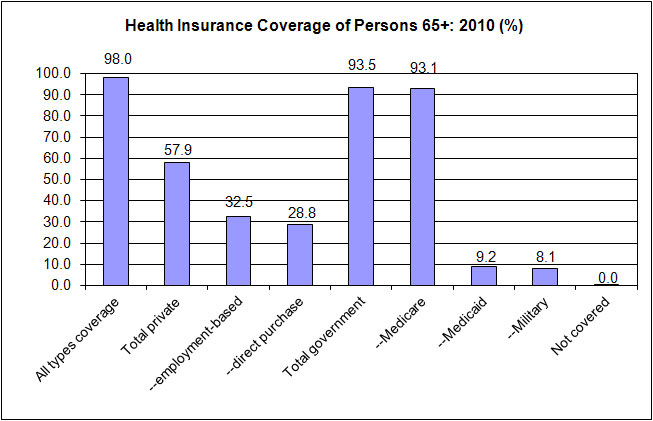 Note: Figure 9 data is for the non-institutionalized elderly. A person can be represented in more than one category. (Source: “Income, Poverty, and Health Insurance Coverage in the United States: 2010,” P60 239, issued September, 2011, by the U.S. Census Bureau. Medicare beneficiary data is from the Medicare Current Beneficiary Survey retrieved from the NCHS Health Data Interactive data warehouse)

Some type of disability (i.e., difficulty in hearing, vision, cognition, ambulation, self-care, or independent living) was reported by 37% of older persons in 2010. Some of these disabilities may be relatively minor but others cause people to require assistance to meet important personal needs. In 2005, another survey found that almost 37% of older persons reported a severe disability and 16% reported that they needed some type of assistance as a result. Reported disability increases with age: 56% of persons over 80 reported a severe disability and 29% of the over 80 population reported that they needed assistance. There is a strong relationship between disability status and reported health status. Among those 65+ with a severe disability, 64% reported their health as fair or poor. Among the 65+ persons who reported no disability, only 10% reported their health as fair or poor. Presence of a severe disability is also associated with lower income levels and educational attainment.
In another study which focused on the ability to perform specific activities of daily living (ADLs), over 27% of community-resident Medicare beneficiaries over age 65 in 2009 had difficulty in performing one or more ADLs and an additional 12.7% reported difficulties with instrumental activities of daily living (IADLs). By contrast, 95% of institutionalized Medicare beneficiaries had difficulties with one or more ADLs and 74% of them had difficulty with three or more ADLs. [ADLs include bathing, dressing, eating, and getting around the house. IADLs include preparing meals, shopping, managing money, using the telephone, doing housework, and taking medication.] Limitations in activities because of chronic conditions increase with age. As shown in Figure 9, the rate of limitations in activities among persons 85 and older are much higher than those for persons 65-74.

Except where noted, the figures above are taken from surveys of the non-institutionalized elderly. Although nursing homes are being increasingly used for short-stay post-acute care, about 1.3 million elderly are in nursing homes (about half are age 85 and over). These individuals often have high needs for care with their ADLs and/or have severe cognitive impairment due to Alzheimer’s disease or other dementias.
(Sources: Americans with Disabilities: 2005, December 2008, P70-117 and other Internet releases of data from the U.S. Census Bureau, the Centers for Medicare and Medicaid, and the National Center on Health Statistics, including the NCHS Health Data Interactive data warehouse)

*Principal sources of data for the Profile are the U.S. Census Bureau, the National Center for Health Statistics, and the Bureau of Labor Statistics. The Profile incorporates the latest data available but not all items are updated on an annual basis.
**Excludes persons of Hispanic origin.
***The U.S. Census Bureau’s 2010 Decennial Census release revised downward the previously issued estimates of the 100+ population.
________________________________________
A Profile of Older Americans: 2011 was developed by the Administration on Aging (AoA), U.S. Department of Health and Human Services. The annual Profile of Older Americans was originally developed and researched by Donald G. Fowles, AoA. Saadia Greenberg, AoA, developed the 2011 edition.
AoA serves as an advocate for the elderly within the federal government and is working to encourage and coordinate a responsive system of family and community based services throughout the nation. AoA helps states develop comprehensive service systems which are administered by 56 State and Territorial Units on Aging, 629 Area Agencies on Aging, 246 Native American and Hawaiian organizations, and approximately 20,000 local service providers.